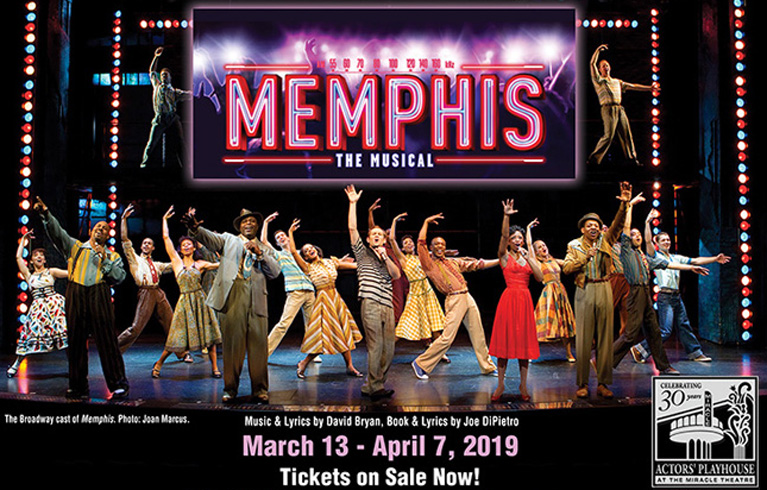 Actors’ Playhouse is thrilled to announce the production of Broadway’s smash hit musical Memphis will being playing on March 13 through April 7, 2019 at the Miracle Theatre. The company will feature an impressive ensemble of South Florida and New York’s finest triple-threat performers, regional theatre favorites from across the country and a member of the Broadway National Tour of Memphis.

Winner of four Tony Awards® including Best Musical, Best Score, Best Book and Best Orchestrations, Memphis takes place in the smoky halls and underground clubs of the segregated 50’s, where a young white DJ named Huey Calhoun falls in love with everything he shouldn’t: rock and roll and an electrifying black singer Felicia Farrell. Memphis is an original story about the Cultural Revolution that erupted when his vision met her voice, and the music changed forever.

Filled with high-octane dancing, songs that perfectly capture the era and an absorbing tale of fame and forbidden love, the show offers soaring emotion and roof-raising rock ‘n’ roll. The show’s Tony®-winning original score features music by Bon Jovi’s founding member and keyboardist David Bryan and lyrics by Bryan and Joe DiPietro (I Love You, You’re Perfect, Now Change), who also pens the musical’s book. The musical is directed by David Arisco, artistic director of Actors’ Playhouse at the Miracle Theatre.

Ticket prices range from $30 to $75. Tickets can be purchased by calling (305) 444-9293, online or at the Actors’ Playhouse Box Office at 280 Miracle Mile. The theatre offers 10 percent off all weekday performances for seniors and $15 student rush tickets to any performance 15 minutes prior to curtain with identification. Group discounted rates are offered for 15 patrons or more through the group sales department at (305) 444-9293 ext. 1.